by rain | About the Breed

DISCLAIMER: The information provided in this story does NOT prove your dog should be vegetarian or vegan.  We are NOT advocating for a specific diet preference for your dog.  This is a report on one specific case of a dog who was able to thrive on such a diet.  You are advised to seek professional advice from a veterinarian prior to making any significant changes to your dog’s diet. 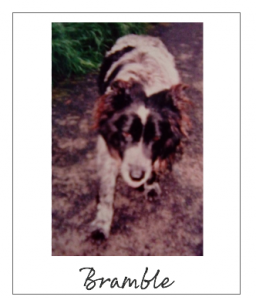 Have you heard of her story before? Bramble, an amazing Border Collie who lived to just over 25 years old. That’s equivalent to 189 in dog years!

Bramble is a vegetable-eating dog who lived in the UK. Bramble held the Guinness World Record for being the world’s oldest dog at the time.

As a veggie eating dog, Bramble lived on an exclusively vegetarian diet of organic vegetables, rice, and lentils. Bramble only ate once a day and she exercised a lot.

Anne Heritage, Bramble’s owner, said she simply fed her a big vegan bowl fare every evening. As a vegan herself, Anne explains that Bramble is an inspiration. It just goes to show that if you eat the right things and keep on exercising a lot can extend your life.

Bramble’s age is considered to be 189 years old. This is because the common usage for counting dog years is equivalent to 7 dog years for every human. There are also non-vegetarian dogs who lived long such as the Australian Cattle Dog named Bluey who lived 29 years and five months.

However, you might be wondering, aren’t dogs carnivores? There are some experts who claim that dogs are scavenging carnivores. This means that they are naturally meat eaters. However, they can sustain themselves on other protein sources such as vegetables and rice.

There are other experts who say that dogs are omnivores or can live on a diet composed of fruits, vegetables as well as meat.

Nevertheless, it is amazing how this wonderful dog lived longer compared to other dogs or any breed of dog. Bramble really is an amazing dog with an amazing story.