Lauren is a full-time Business Science student and a full-time owner of a quirky, crazy, two year old Border Collie named Cooper, who has a knack for giving high-fives and rolling over. Although very loving, Cooper makes life a little extra challenging with his lead aggression which is an additional hurdle to the ones they are used to in agility. Despite that, Lauren is determined to help Cooper overcome his issues so that they can continue to explore the Cape without fear.  You can follow Lauren & Cooper on Instagram. 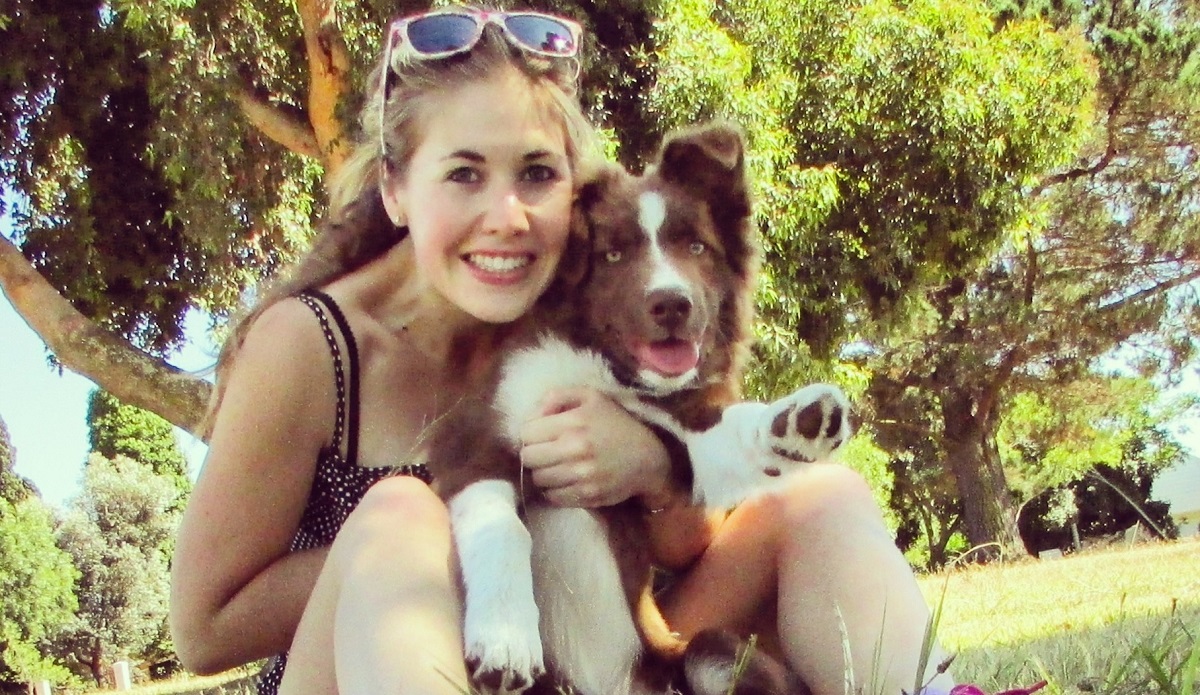 It’s 4AM when my mother and I dragged ourselves out of bed and departed on the long road to Sutherland from Cape Town, South Africa. We took turns driving through the Karoo desert until we eventually arrived at this small town – blink and you’d miss it. I pulled over at the edge of Sutherland. We sent them one final email to let them know we would be there ‘soon’ as we would lose all signal as we started down the muddy gravel road for the next hour and a half. 62 kilometers later, we saw them – a friendly old couple waving at us while holding a brown and white ball of fluff. They had been sending us pictures of the puppy for the last ten weeks and here he was – fat and fluffy – barely squirming as he was placed in my arms. 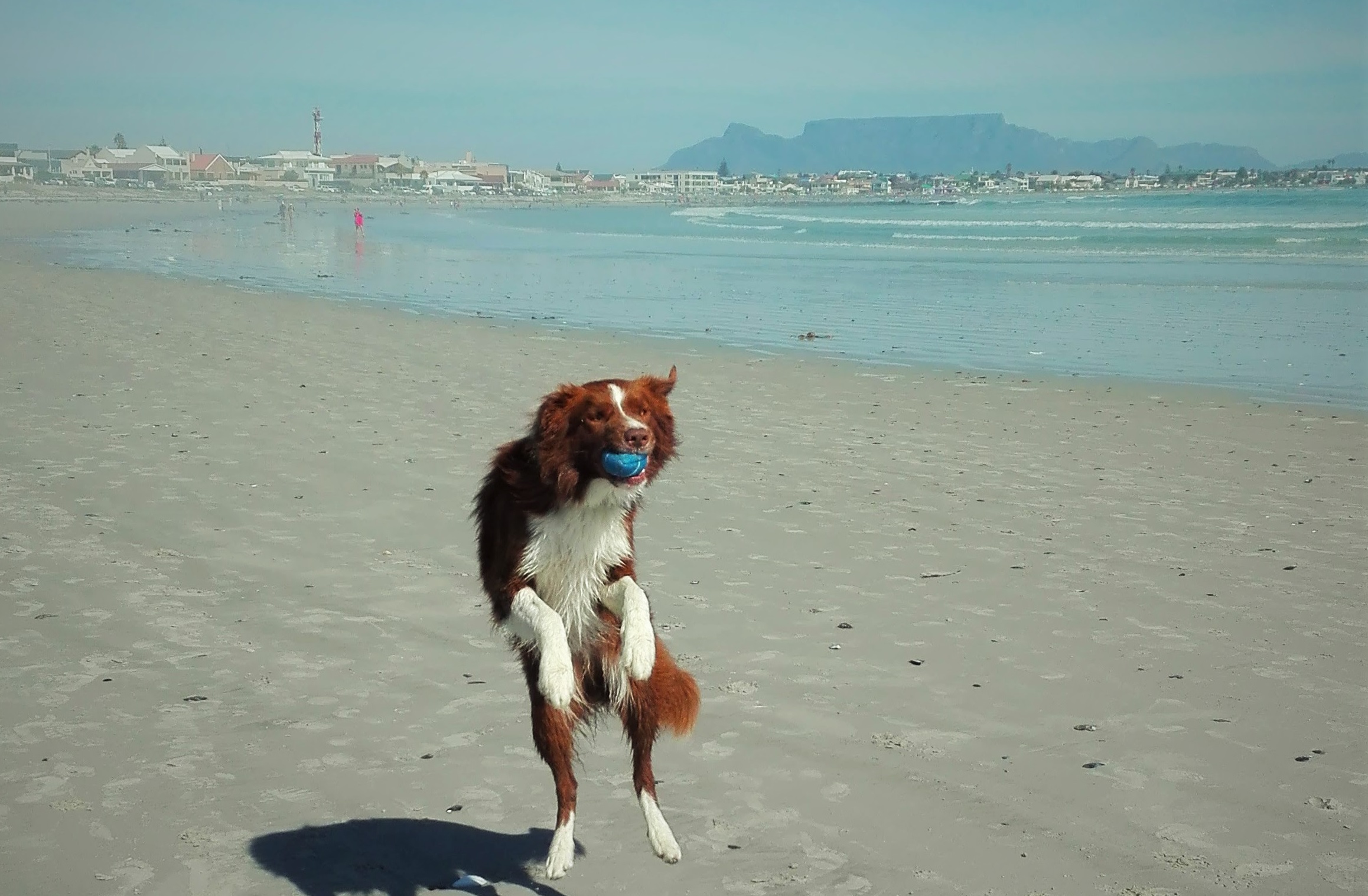 I decided to name him Cooper because of his blue eyes like actor Bradley Cooper. However, as he got older his eye colour changed to a light yellow colour and someone told me that Cooper means ‘feisty’ and I decided that it suited him even more. My very first dog was a Border Collie named Tess. She was quiet and reserved, well-mannered and obedient. Cooper is not like Tess. While he’s very smart, he spends his days running laps around our property, squealing at dogs that walk past and having naps on the furniture. While I took him to puppy classes and involved him in socializing three times a week as a puppy, Cooper suffers from lead aggression which makes him very difficult to handle around dogs. 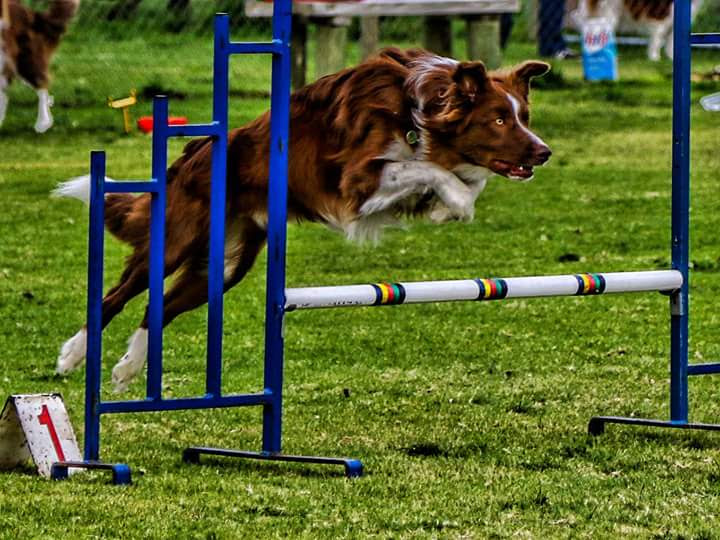 I joined the Cape Handlers Dog Club where we practise agility on Thursdays and obedience on Sundays. Cooper’s endless energy made training him a dream. He loves to work and will do anything for a treat. However, obedience training was made very difficult due to his aggression. He would launch himself at dogs that pass by, barking and growling, pulling me with him. He wore an orange bandana to warn other handlers. Most days, I went home in tears thinking I had a ‘bad dog’ or that I was a terrible handler and owner.

Cooper’s behaviour attracted a lot of attention. Nearly everyone had an opinion and a piece of advice that they felt obliged to share with me. Not everyone’s advice was good or even kind and I learned how quick dog owners are to judge. However, the one opinion that I agreed with was that Cooper’s light coloured eyes caused a lot of other dogs to be reactive towards him. One example of this is how he was attacked by a Rottweiler that pulled away from its owner that ran past all the other dogs on the field except for Cooper who was working with me at the time. Another theory that I believe is true is that Cooper behaves worse when restrained (on a leash or tied up) because he is unable to run away when he is scared. His next available option is to fight. He loves to play off-leash with other dogs but this attitude changes when he’s tied up again. Cooper is afraid of many things, from plastic bags to prams to bicycles to hats. We found him hidden in the pantry cupboard on his first night at our house after he heard an airplane for the first time. 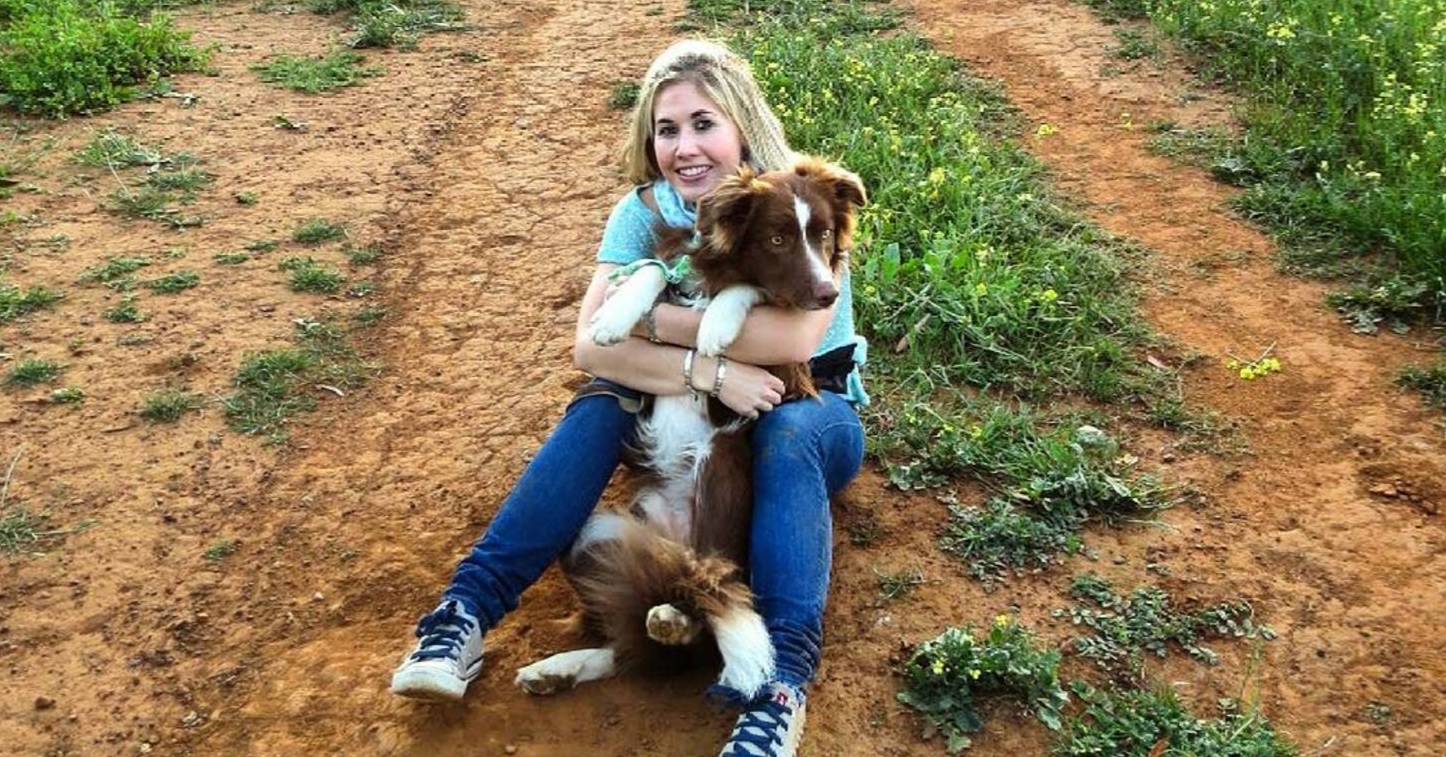 Throughout our journey, I discovered many other border collies that behave like Cooper. While many can be placid and peaceful, there are some who can be snappy and fearful. I found the best technique is to treat Cooper firmly but with kindness. We practise the ‘Look-at-me’ command a lot which has taught him to make eye contact with me rather than other dogs. I reward him with a treat every time he chooses me over his fears. He is such a sensitive dog. He is very easily affected by a person’s energy, as is typical of Border Collies. They were bred to herd sheep and understand their handler’s whistles and movements to guide sheep to where they need to go. They are incredibly intuitive and it has been an amazing experience to witness this feature in my own dog.

While our progress has been put on hold due to my studies, we plan to start doing a lot more agility and obedience competitions in the near future. Cooper is a working dog and he thrives on having a purpose and a job to do. While stubborn at times, Cooper is very smart and picks up new tricks in hardly any time at all. So far we are in class 5 at our dog club for obedience and have just started doing a few dog jumping demos and agility fun shows.

I am so blessed to live in Cape Town. Cooper loves hiking and we have had many amazing adventures exploring mountains and caves together. Cooper also loves the beach and while he had a fear of water (which is almost unheard of in border collies) he is learning to love frolicking in shallow waves.

When not playing fetch, hiking or running around, Cooper can be found napping or following me around the house (even into the bathroom). Together, we share a single bed and Cooper certainly enjoys cuddling and sleeping in late while I go off to university. While he still has a few issues, he is the most loving dog I have ever had the pleasure of owning. He loves playing with his dachshund brother Enzo and is often found licking our three cats – much to their delight. His favourite person in the world is my boyfriend and he loves to dance with my mother, take selfies with my sister and share biscuits with my father. The brown and white ball of fluff has grown into a very handsome dog and I’m proud of all we have achieved together thus far!

Looking for a Good Book To Help Train & Raise Your Border Collie?  We Recommend…

About This Book..
Historically, Border Collies are known as a working dog breed. Due to this very fact there are certain dog behaviors and instincts particular to Border Collies only. These behaviors and instincts define the personality of the dog. Understanding these behaviors and instincts is imperative if you desire a well-trained/behaved dog. This book is based on years of experience and thorough research helping you to choose, raise, train and live in harmony with your Border Collie. This book has been written by truly taking into consideration the breed as well as its abilities as this aspect is often ignored by owners of this dog. The content of this book will provide you with an insight of how a Border Collie relates and interacts with its owner and the outside world. Once you’ve read this book, you’ll be better equipped to own and take care of a Border Collie so that it becomes the wonderful companion it’s meant to be!